It’s pretty well known now that the average mobile app sucks up as much information as it can about you and sells your data to shadowy nefarious organizations. My wife recently installed a sort of “health” tracking app and immediately got three unwanted subscriptions to magazines with names like “Shape.” We have no idea how to cancel them, or if we’ll eventually get an invoice demanding payment. This is a best case scenario, with worse cases being that your GPS location is tracked, your phone number is sold to robocallers, or your information is leaked to make it easier for hackers to break into your email account. All because you play Mobile Legends: Bang Bang!

But being able to track and understand your habits is a good thing. It encourages you to be healthier, more financially responsible, or to do more ultimately gratifying activities outside of staring at your phone or computer. If a tracker app is the difference between an alcoholic sticking to their AA plan and a relapse, you shouldn’t have to give up your privacy for it.

Rather than sell my data for convenience, I’ve recently started to make my own tracking apps. Here’s how:

Here’s an example I made as a demo, but which has a real analogue that I use to track bullshit work I have to do at my job, and how long it would take to avoid it. When the amount of time wasted exceeds the time for a permanent fix, I can justify delaying other work. It’s called the Churn Log. 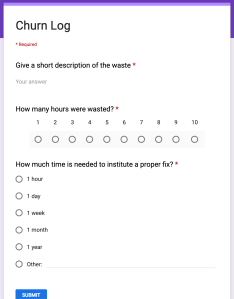 And the linked spreadsheet with the raw response data looks like:

These are super fast to make, and have a number of important benefits:

The downsides are that it’s not as convenient as being completely automated. For instance, a finance tracker app can connect to your credit card account to automatically extract purchase history and group it into food, bills, etc. But then again, if I just want a tracker for my food purchases I have to give up my book purchases, my alcohol purchases (so many expensive liqueurs), and my obsession with bowties. With the Google Form method, I can quickly enter some data when I’m checking out at the grocery store or paying a check when dining out, and then when I’m interested I can go into the spreadsheet, make a chart or compute some averages, and I have 90% of the insight I care about.

But wait, doesn’t Google then have all your data? Can’t it sell it and send you unwanted magazines?

You’re right that technically Google gets all the data you enter. But with Mobile Legends: Health Tracker! (not a real app) they get to pick the structure of your entered data, so they know exactly what you’re entering. Since Google Forms lets you build a form with arbitrary semantics, it’s virtually impossible that enough people will choose the exact same structure that Google could feasibly be able to make sense of it.

And even if Google wanted to be evil and sell your self-tracked data, it wouldn’t be cost effective for Google to do so. The amount of work required to construct a lucrative interpretation of the random choices that humans make in building their own custom tracker app would far outweigh the gains from selling the data. The only reason that little apps like Mobile Legends Health Tracker can make money selling your data is that they suck up system metrics in a structured format whose semantics are known in advance. Disclosure: I work for Google, they aren’t paying me to write this—I honestly believe it’s a good idea—and having seen Google’s project management and incentive structure from the inside, I feel confident that custom tracker app data isn’t worthwhile enough to invest in parsing and exploiting. Not even to mention how much additional scrutiny Google gets from regulators.

While making apps like this I’ve actually learned a ton about spreadsheets that I never knew. For example, you can select an infinite range—e.g., an entire column—and make a chart that will auto-update as the empty cells get filled with new data. You can also create static references to named cells to act as configuration constants using dollar signs.

Even better, Google Sheets has two ways to interact with it externally. You can write Google Apps Script which is a flavor of Javascript that allows you to do things like send email alerts on certain conditions. E.g., if you tracked your dining budget you could get an email alert when you’re getting close to the limit. Or you could go full engineer and use the Google Sheets Python API to write whatever program you want to analyze your data. I sketched out a prototype scheduler app where the people involved entered their preferences via a Google Form, and I ran a Python script to pull the data and find a good arrangement that respected people’s preferences. That’s not a tracker app, but you can imagine arbitrarily complicated analysis of your own tracked data.

The beauty of this method is that it puts the power back in your hands, and has a gradual learning curve. If you or your friend has never written programs before, this gives an immediate and relevant application. You can start with simple spreadsheet tools (SUM and IF macros, charting and cross-sheet references), graduate to Apps script for scheduled checks and alerts, and finally to a fully fledged programming language, if the need arises.

I can’t think of a better way to induct someone into the empowering world of Automating Tedious Crap and gaining insights from data. We as programmers (and generally tech-inclined people) can help newcomers get set up. And my favorite part: most useful analyses require learning just a little bit of math and statistics 🙂