A year ago today I self-published “A Programmer’s Introduction to Mathematics” (PIM). In this short note I want to describe the success it’s had, summarize the complaints of some readers and the praise of others, and outline what’s next.

Since publication PIM has sold over 11,000 copies. 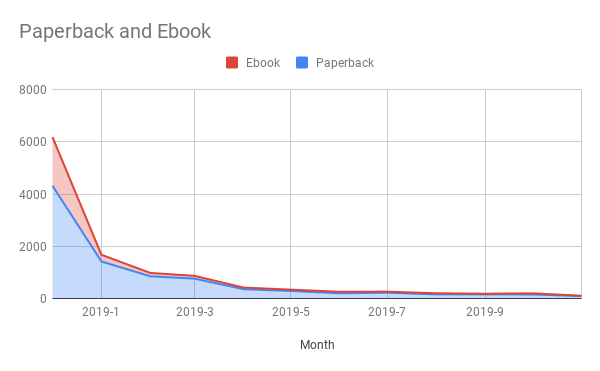 A rough chart showing the sales of paperback and ebook copies of PIM.

As expected, the sales dropped significantly after the first month, but leveled out at around 200 copies per month. With self-publishing royalties are generally high, and in the end I make a minimum of $15 on each sale. I’m thrilled. The book has been successful well beyond my expectations. I remember joking with friends that I’d call the project a failure if I didn’t sell a thousand copies, and my wife joking that if I sold twenty thousand I should quit my job. Reality found a happy middle ground.

Outside of my normal activity online, a pre-publication mailing list, and a $400/month cap on a Google Ads campaign, I’ve done little to promote the book. I don’t track conversion rates (pimbook.org is javascript-free). Though I can’t control what Amazon and Google collect on my behalf, I don’t look at it. I have an ad on the sidebar of my blog, which I suspect drives most of the sales via organic search results for various math topics.

Combining all the costs together, from Google Ads, Gumroad premium, tech review, and sending signed copies to Patreon patrons—but not including my time—a year of sales has cost about $4,500.

Not all readers enjoyed the book. As the Amazon reviewer “SCB” put it, “the book feels more like a refresher than an introduction.” User “zach” concurred, calling it “not a kind introduction,” and user “MysteryGuest” said its “difficulty ramps up quickly.” The other two emphatic criticisms I heard were that I did not include solutions for the exercises, nor did I provide a version of the ebook in standard ebook formats.

I won’t waste your time here rebutting critics, and I broadly agree with their claims. The difficulty does ramp, I didn’t provide solutions, and I didn’t make a Kindle version. I have no plans to change that as of now.

On the other hand, many readers enjoyed the book. Amazon reviewer “B.W.” remarked, “First time I’ve ever read about BigO and actually had it ‘click’.” User “Scuba Enthusiast” said the book “conveys the cultural assumptions, conventions, and notations in a way that someone familiar with programming is able to ‘grok’.”

Many readers have also told me via less public means they enjoyed the book. A colleague of mine at Google—who is an excellent engineer but not all that interested in math—had the need to dig into some mathematical notation describing an integer linear program his team was responsible for. He said reading the first few chapters of my book helped him decipher the symbols and ultimately understand the model. Later he told me he had started to design his own optimization models.

I was also delighted to read Tim Urian’s thoughts, which he recently posted a public Google doc. He detailed his struggles with reading the book, and how he overcame those struggles.

Then there was a public form I put up for submitting errata. Users submitted over 200 errors, comments, and clarifications. I’ve addressed them for the second edition, and I’m glad to say most mathematical errors are not substantial, and I recognize when I wrote one thing, later changed my mind about some detail (like indexing from zero or one), and did not adequately update what was already written.

On a related note, I’m sad to say I haven’t taken more time to write blog posts. As my responsibilities at work have grown, I’ve become more swamped and been less motivated. That’s also been coupled with some blog projects I have tried but failed to make meaningful progress on, and I feel bad abandoning them because I feel there is no principled reason I can’t finish them.

Postscript: I’ve been asked a few times about the rights to foreign translations and distributions of the book. I have no experience in that, and I’ve basically been ignoring all incoming requests. If anyone has advice about how to navigate this, and whether it’s worth the effort for a solo operation like my own, I’d be open to hear it.